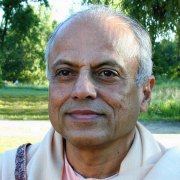 In March 1989, Swami Prapannananda was sent to America to become the Assistant Minister of the Vedanta Society of Sacramento. After finishing his academic education at the University of Calcutta and working for sometime in an engineering firm, he joined the Ramakrishna Order. An initiated disciple of Swami Vireswarananda, the tenth president of the Ramakrishna Order, received his final monastic vows from him on 1976.

Immediately after joining, Swami was sent to Rajkot in Gujarat State where he passed twenty years of his monastic life as an important worker in various fields of the center including temple service, relief and rehabilitation, publication and book sales, dispensary and library work. He spent two years in Belur Math for scriptural studies.

After the passing away of Swami Shraddhananda in July 1996, he was appointed Minister and Teacher of The Vedanta Society of Sacramento. 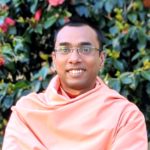 Throughout his monastic life, Swami Ishadhyanananda has contributed articles to various journals of the Ramakrishna Order. Apart from Ramakrishna-Vedanta literature, the swami also enjoys a keen interest in philosophy, positive psychology, neuroscience, and current ideas that are shaping our world today. 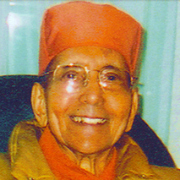 He served at the Ramakrishna Mission Vidyapith, Deoghar and joined the Purulia center at the call of Swami Hiranmayananda, the Founder Secretary. He was the Headmaster of the Ramakrishna Mission Vidyapith, Purulia from 1959 to 1962. He returned there to serve as the Secretary from 1969 to 1975. He was one of the most popular Headmasters and Secretaries of the Vidyapith and he was the writer of the patriotic pledge recited by the students daily in the school assembly.

He also served successfully in the tribal areas of India. One of these positions was as Secretary and Headmaster at the Cherrapunji center, Meghalaya. From 1975 to 1982, he assumed the post of Secretary and Principal in another English-medium residential school in the tribal province of Arunachal Pradesh. Mrs. Indira Gandhi, the contemporary Prime Minister of India, was deeply impressed with the work and activities of this school when she visited the region.

He also had the rare opportunity to serve two Presidents of the Ramakrishna Order, Swamis Vishuddhanandaji and Madhavanandaji, as their Private Secretary. The Headquarters at Belur Math in Calcutta asked him to come to the West in 1982 as the Assistant Minister at the Vedanta Society of Sacramento, California, USA. In March 1989, he came to Canada to take over charge of the Vedanta Society of Toronto’s new center, where he conducted regular services and classes. The Swami, as a Chaplain of the University of Toronto, conducted monthly classes on the Vedanta philosophy at the University. He was regularly invited by different organizations and educational centers to give talks on Vedanta in various cities in Canada, including Montreal, Edmonton, Calgary, Winnipeg and Halifax, as well as some cities in the United States. 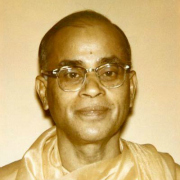 Also a Musician, Swami directed a choir and introduced Bengali and Sanskrit songs of The Gospel of Sri Ramakrishna. He authored nine books on education, religion and philosophy and contributed numerous articles in English and Bengali on religious and philosophical topics to several periodicals through the years. His last book, “Seeing God Everywhere” was published after his passing away. 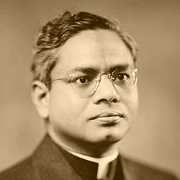 Swami Ashokananda was a disciple of Swami Vivekananda and a monk of the Ramakrishna Order of India .

His story continued in California, starting in the early 1930s. Under his leadership the Vedanta Society of Northern California built three temples (in San Francisco, Berkeley and Sacramento) and bought two thousand acres of land in Olema that became the largest Vedanta Retreat in America.

In 1948, a small group of Sacramento men and women became deeply interested in the teachings of Vedanta and attended services at the Vedanta Temple in San Francisco. Their enthusiasm led to a move to build a Vedanta Center in the Sacramento area. In 1949, the revered Swami Ashokananda at the San Francisco Temple called for construction of a Sacramento Center, which would be a branch of the main Society in San Francisco.

Swami Ashokananda, drove from the San Francisco center, to conduct the services at the Vedanta Society of Sacramento.

From 1932 until his death in December 1969 at the age of 76 he was in charge of the Vedanta Society of Northern California, San Francisco.

Manage Cookie Consent
To provide the best experiences, we use technologies like cookies to store and/or access device information. Consenting to these technologies will allow us to process data such as browsing behavior or unique IDs on this site. Not consenting or withdrawing consent, may adversely affect certain features and functions.
Manage options Manage services Manage vendors Read more about these purposes
View preferences
{title} {title} {title}