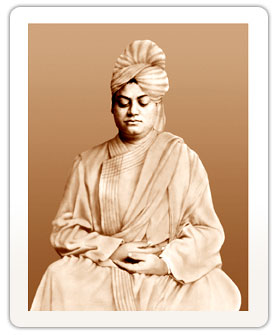 Swami Vivekananda was a magnetic figure to all who met him. For many who had never heard of Vedanta, he opened a door to spiritual fulfillment through realization of one’s true Self. Whoever is touched by Vedanta today owes a debt of gratitude to Swami Vivekananda.

After the passing of Ramakrishna, Swami Vivekananda dedicated his life to bringing Ramakrishna’s teachings to the rest of the world, and to improving the lives of needy people everywhere. To that end he traveled the world launching Vedanta Centers in many places, and he established the Ramakrishna Mission and the Ramakrishna monastic Order. His humanitarian work and inspired teaching made him world-famous.

Never content to believe what he was told, he always demanded proof or direct experience before accepting a claim. This critical attitude guided his quest for God. He spoke to one religious man after another, asking if they had seen God. None could say yes—until he met Sri Ramakrishna, who said he had been waiting for Narendra, and treated him as a spiritual son, and proved by action that he saw and spoke with God many times every day. Though suspicious at first, Narendra was captivated and became his leading disciple.

Sri Ramakrishna died five years after Narendra’s training began. Before the end, Ramakrishna brought Narendra to Self-realization by touching his forehead. Until then, Ramakrishna had not been eager for Narendra to reach full realization, because he knew (and told others) that Narendra would not remain here long after he discovered who he really was.

Ramakrishna told all his disciples that after he was gone, they should follow Narendra’s lead. Narendra took on the task with a will, and founded a monastery (the Ramakrishna Math) where he and his brother disciples carried on their spiritual practices. He gave all the disciples monastic names, and called himself Swami Vivekananda (“Swami” means “teacher”). Following ancient tradition, he and the other monks divided their time between the monastery and traveling as itinerant monks. Swami Vivekananda traveled for several years through all parts of India, seeing poverty that aroused in him an immense compassion for the poor and uneducated.

In May of 1893 a group of his disciples paid his fare to the United States, to attend a Parliament of World Religions in Chicago. His speeches at the parliament drew great ovations, and Swami Vivekananda was invited to speak all through the eastern United States.

For an inspiring rendition of Swami Vivekananda’s brief opening speech at the Parliament of World Religions, Click here. The voice in the presentation is not the Swami himself—but if he sounded like this, it is easy to see why he made such a great impression. Wherever he went, he inspired people with Ramakrishna’s message—that all religions are right, each soul is divine, and the goal of life is to realize that divinity.

After four years of strenuous teaching, Vivekananda returned to India to the accolades of the entire country. He responded with a powerful call for service to the poor and needy, who should be treated as manifestations of God. In this spirit he and his fellow monks established the Ramakrishna Mission, which is dedicated to educating and uplifting the poor with centers and schools throughout India. In recent years, its reach has spread to other areas where help is needed, as in the great 2004 tsunami disaster of southeast Asia.

True to Sri Ramakrishna’s prediction, Swami Vivekananda did not remain long on this Earth. After a short return to the United States to encourage the new Vedanta centers, he made his final return to India. In 1902, at the age of 39, he died at a Monastery he had founded in the village of Belur on the holy Ganges River, just north of Calcutta. In a fitting coincidence, Swami Vivekananda—whose main teaching was done in the United States—died on the 4th of July. His brief ten years of teaching and service have touched the lives of countless people around the world, and will continue to spread until the end of time.